A Synopsis of Association Croquet

Association Croquet is played with four balls, Blue and Black versus Red and Yellow, on a court shown to the right. The Game can be played as singles or doubles, each player in doubles playing with a particular ball throughout the game. Each ball must run a set course, as shown in the diagram at the end of this page, going through each hoop twice in a specific order and direction and then hitting the peg. The side which first completes this course with both its balls wins the game. Thus the winning side has 26 points to score (12 hoop points and the peg point with each ball). 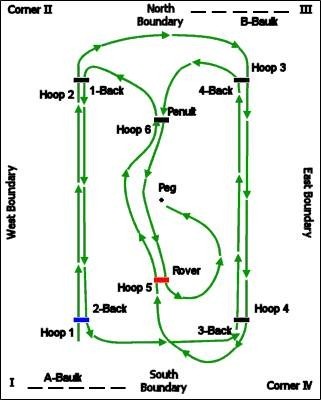 A ball scores a hoop point when it passes right through a hoop in its correct order (‘runs a hoop’) in one or more strokes. The point is scored whether the ball is struck directly by the player or by another ball. Clips coloured to match the balls are placed on the hoops or peg to indicate the next point for each ball. The clips are placed on the crown of a hoop for the first six hoops and on the side of the hoop for the last six.

The sides take alternate turns. In the first four turns the four balls are played from one of the starting lines (‘baulk lines’) at each end of the court. There is no strict order of playing the balls. Once the four balls are on the court a side chooses which of its two balls it shall play in each turn.

A turn consists initially of one stroke only, but extra strokes can be earned in two ways:

If the player’s ball runs a hoop, he is entitled to another stroke.

If the player’s ball hits another ball (‘makes a roquet’), he places his own ball in contact with the other ball and then strikes his ball so that the other ball moves or shakes (‘takes croquet’). After this the player is entitled to one further stroke.

The player may roquet and thus take croquet from each of the other three balls in succession in any turn; each time his ball runs a hoop he may repeat this process. Thus, by a combination of taking croquet and running hoops, a series of points can be scored in a turn (‘making a break’). A turn ends when the player has made all the strokes to which he is entitled, or if he sends a ball off court when taking croquet, or if he makes a fault as defined in the Laws. A turn does not necessarily end if a ball is sent off court in any stroke other than when taking croquet.

At the end of each stroke any ball which has been sent off court is placed a yard inside the boundary (‘on the yard-line’) nearest to where it went off, and any ball lying between the boundary and the yard-line, except the player’s own ball, is also replaced on the yard-line. When a ball has scored its last hoop point (‘becomes a rover’) it can score the peg point either by the player hitting it onto the peg or by being hit onto the peg by another rover ball. The ball is thus ‘pegged-out’ and removed from the court.

The game of Association Croquet is in essence a tactical struggle with each player trying to manoeuvre both his own and his opponent’s balls to make points for his side whilst restricting his opponent’s chances of doing the same by careful positioning of the balls at the end of his turn.