Last week was a busy one for the GC section as the season draws to a close. Fortunately the weather, in the main, cooperated for the holding of the singles 7 hoop preliminaries which took place on Tuesday and Thursday with maximum wins for David Dawsey and Tony Frewin ensuring that they would contest the final next Tuesday. Mick Fryer and Tony played their season long handicap final on Thursday with Mick taking the trophy by 7 hoops to 3. Th season long singles final will also be played on Tuesday when Judith will play Tony. So a busy time for Tony! The week ended with Chelmsford travelling to Newport to play in the EACF B-Level Final versus Enfield (N). The teams: Chelmsford: Tony Frewin (3) John Mariner (3) Judith Hand (3) and John Skuse (3) and Enfield (N): Peter Brock (3) Brian Dawes (3) David Barnicoat (4) and Andrew Fall (4). The weather at the start was chilly but dry as the first 4 doubles matches were played. Tony and John S after building up a substantial lead finally beat Peter and Andrew 6-5 on time whilst Judith and John M narrowly lost to Brian and David 6-7. The second set of doubles were also shared as Judith and John M beat Peter and Andrew 7-6 whilst Tony and John S lost 4-7 to Brian and David. Score 2-2. Hopes were high at this stage that we might surprise ourselves and beat an Enfield team for the first time since computer records were introduced in 2010 (spoiler alert) but alas it was not to be . In the first set of 4 singles Tony showed the way by beating Enfield’s number 1 Peter 7-5 but that was our only win. After lunch worse was to follow in the next set as we lost them all by varying margins. Judith’s pep talk before the next set stated the blindingly obvious “we have to win the remaining 8 singles to win the match.” John S and Tony obeyed to the letter by both winning 7-5 over Brian and David respectively but alas it was not to be. Match score at this stage Enfield 11 Chelmsford 5. After some discussion the final set was played in autumnal sunshine which Enfield won 3-1 with Tony chalking up a third singles win 7-3 over Andrew. So final score: ENFIELD (N) 14 (127 hoops) CHELMSFORD 6 (101 hoops). Our star player unquestionably was Tony Frewin with 3 singles victories and a share in a doubles win. Well played Tony! Enfield retain the trophy they won in 2018 – many congratulations. The day concluded with some lovely cakes supplied by our hosts and thanks were expressed to Terrey Sparkes – EACF Secretary for match managing the final and to Newport for hosting the final. 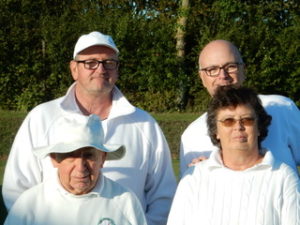 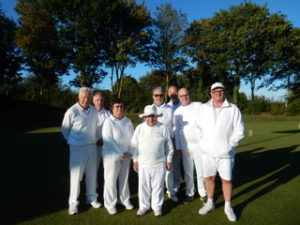