On Friday Chelmsford Green played Maldon Lakeside in a handicap match at Writtle. The teams: David Dawsey (7) Linda Murrell (9) Anne Skuse (10) Betty Craig (12) for Chelmsford and Peter Marven (10) Shirley Macro (10) Mary Burd (11) and Colin Beckett (12) for the visitors. Handicap matches are often close and, my word, this one proved to be no exception. After team photos were taken for our visitors play started with the 2 doubles matches being shared. Before lunch 8 singles games were played which were also shared 4-4 with Maldon just ahead on hoops run. Both teams had thoughts of getting home early to see Nadal and Federer so the afternoon games started before 2pm and once again the next 4 were shared and the score stood at Greens 7 Maldon Lakeside 7 before the last round. On the lower lawn both David and Linda won so at least a draw had been achieved. On the top lawn Betty was fighting hard to beat her opponent but, thanks to a shot of about 30 yards, Peter ran hoop 8 and eventually won 7-4. It now looked probable that the match would be halved as Anne was losing 5-6 to Shirley and had not enjoyed much success throughout the day. However with 3 balls near hoop 11 Anne proceeded to run hoop 12 with a shot of 25 yards from the far boundary. The remaining 3 balls, now being offside, were moved to the penalty area before all playing short to the golden hoop. Finally Anne’s other ball found its way to that same boundary with a slight angle and with the other balls now much closer to the hoop struck her shot clean through to claim victory for the Greens by 10 hoops to 8. The closeness of the match was reflected in the fact that Lakeside actually won more hoops (100) to Chelmsford’s (98). It has also to be mentioned that all 3 games that went to the golden hoop were won by Chelmsford. For the Greens David led the way by winning his doubles with Betty and all 4 singles whilst Linda managed 3 singles win. In fact all 8 players had some success through the day. fter the match, which was played in an excellent spirit, tea and cakes were consumed, before Mary thanked Chelmsford for their hospitality and David replied for the hosts. Everyone went home agreeing that it had been an excellent day’s croquet. 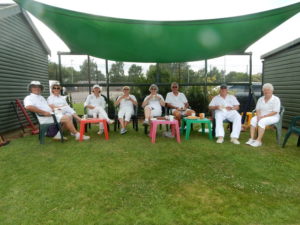