On a splendid September day for croquet with virtually no wind and constant sunshine Chelmsford entertained Southchurch in the final match of this years competition for the Coralie Cup. Each club needs at least 8 players playing doubles to 7 hoops with the players split into two teams the Blues and the Greens. Sounds complicated and indeed it is! Rumours abound that a less difficult format to follow may well see the light of day by next year. Anyhow let’s get on with the report. Southchurch fielded the bare 8 required whilst Chelmsford were able to play 5 players in each team with one sitting out per game. Chelmsford’s Blue team of Peter Wilkinson,Tess Gossett, Anne Skuse, Keith Harris and Ernie Bailey proved rather too strong for their opponents and won their half of the match by 51 hoops to 33 and 10 games to 2. The Green team of Deborah Clarke, Linda Murrell, Betty Craig , Joan Black and Hilary Harris came off 2nd best by 35 hoops to 49 and by 3 games to 9. What a contrast! This meant that Chelmsford following their win at Tipps Cross retained the cup by winning177 hoops with Southchurch on 166 and Tipps Cross on 161. Star player for Chelmsford was Peter who was unbeaten with 5 wins with help from his various partners throughout the day. Following the end of the match Val Clark on behalf of Southchurch handed the Coralie Cup to Tess whilst congratulating us on our win and thanking us our hospitality and the friendliness in which the whole day’s croquet had been played. John responded on behalf of Chelmsford thanking Southchurch for raising a team, amidst many selection difficulties, and expressing the hope that a suitable format can be agreed between the three clubs so that these friendly fixtures may continue for years to come. 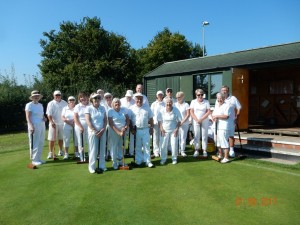