Ten players travelled to Rayleigh on Monday to play Southchurch in a match that would decide who would hold the Coralie Cup for 2016. By virtue of a more substantial win over Tipps Cross the home team had a lead of 12 hoops coming into this match. At lunch time, after 4 of the 6 sets had been played Southchurch still led by 8 hoops. Whatever we had for lunch clearly worked in our favour as the 8 doubles games played after the interval were won by 37 hoops to 19 resulting in a win for Chelmsford by 10 hoops. Final score Southchurch-at-Rayleigh 73 Chelmsford 95. It should be mentioned that Southchurch rested one or two of their better players from this match and gave several of their newer members a chance to enjoy match play for the first time. We thanked Southchurch for their generous hospitality before, during and after the match as Tony Butcher, the home manager presented the cup to as happy a group of 10 you are likely to come across – see photo attached. 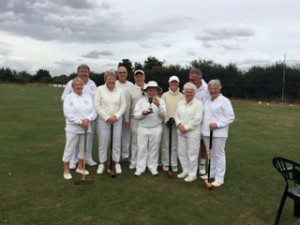