On one of the best days for croquet this year October 2nd saw Chelmsford entertain a strong Colchester side in a level play doubles friendly based on 8 players per side playing 24 games of 7 hoops per game. When lunch was taken the two teams were level on 42 hoops and 6 games each as our guests adjusted well to the conditions and our fast lawns. Games continued to be evenly contested after the break as no fewer than 16 of the 24 games were won by a single hoop illustrate. However a convincing 6-1 win by Paul and Betty versus Michael Manning and Colchester’s captain Pam Hopper helped Chelmsford to gain the upper hand and eventually run out winners by 92 hoops to 76 and by 15 games to 9. Double Banked!! Chelmsford’s team for this fixture: Judith, Anne, Betty, Tess, Bob, David Dawsey, Len and Paul. 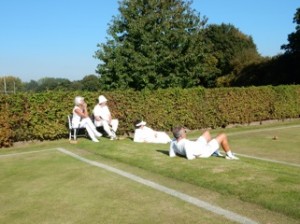