Prior to an extremely well organised fish and chip lunch organised primarily by Betty and Tess, the final of the Singles competition was held on a bright and sunny first day of October. Keith Harris appearing in his first final was perhaps the underdog as he had to play Paul Bridgman who had won the event twice before. Keith took an early lead 3-2 in the first game but eventually Paul’s superior tactical play and some spectacular clearances from long range enabled him to emerge as the winner. Result: Paul 7-4 7-3 Club secretary Tony Frewin presents Paul with the Cup. Keith congratulates Paul on winning before the fish and chips arrive! 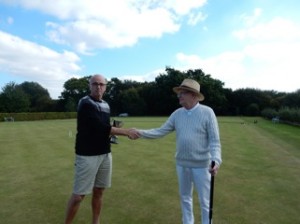 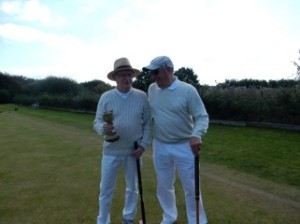