A record number of 15 took part in the 3rd running of this popular level play event which was once again managed by Judith assisted, this year, by Julie. Split into 2 blocs the format, as before, involved playing 4 seven hoop games with the winners of each bloc playing a final of 13 hoops. Karen headed (shall we call it bloc A) by winning 3 of her 4 games with a hoop difference of +6 whilst Tess who also had 3 wins but with a hoop difference of +4 came second. Bloc B was an even closer affair as no fewer than 4 players had an equal number of 3 wins but Judith, with a hoop difference of +8, lead the group with Christine +4 coming 2nd and June and Sheila finishing equal 3rd +2. The final between Judith and Karen could not have been closer and the standard of play was excellent. Never more than a hoop in it matters came to a head at the 13th as Karen managed a jump shot to take the title “Ladies Champion 2017”. Judith, who had won in 2016, had much pleasure in handing over the SB trophy to a grateful Karen. 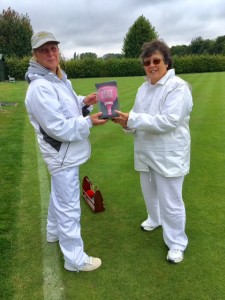