> As a follow up to last year’s inaugural Ladies Level Play competition Monday saw 12 members set forth to try and win the SB trophy and the Ladies Singles Cup. > > Organised by Judith the field was split into 2 blocks of 6 with each player playing 4 best of 13 hoop singles as constraints on time made it difficult to have an all play all in each block. > > In the first block everyone won at least one game but Anne and Linda with 3 wins each out of 4 topped the group with placings decided on hoop differences with Anne +7 to Linda’s +3. > > The second block also showed the strength within the club as all 6 players won at least one game and again there was a tie within the group in that Judith and Karen won all 4 as they had not played each other. Judith however edged it by only 2 hoops with a score of +19 to Karen’s +17. > > So the final was not to be a repeat of last year’s exciting tussle between Karen and Anne. Judith reacted well to the shock of losing the first two hoops as Anne followed up her initial blow with a long range shot from the Southern boundary straight through hoop 2. Quickly levelling by hoop 4 Judith proceeded to take a commanding lead interrupted only by another splendid Anne special on hoop 8 which earned a round of applause from the assembled throng who were no doubt pleased at the speed in which the game was being played. The ending came on hoop 11 as Judith cleared well before winning 7-4. > > As the downing of the Pimm’s took place followed by tea and cakes it was evident that everyone had enjoyed an excellent day’s sport in weather that could only be described as sublime. The photograph shows Anne passing over the trophies to Judith > who was thanked for the work she had done in making the event such a success. 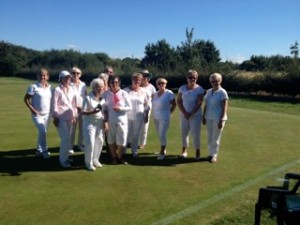