On a bright but chilly day 12 ladies played for the Ladies Singles or commonly known as the “Sexy Babe Trophy.” Split between two groups of 6 playing 4 games of 13 hoops matches were close and play moved quickly. Karen and Judith both had 4 wins in the red group but Karen came top with +18 hoops to Judith’s +15. The rest of the group all had 1 win each. In the black group Joan came out a clear winner being the only one with 4 wins. Betty was runner-up with 3 wins. The final was played whilst the 10 runners-up enjoyed the traditional tea and cakes – usual high standard. Karen won 7-5 well done to both players. 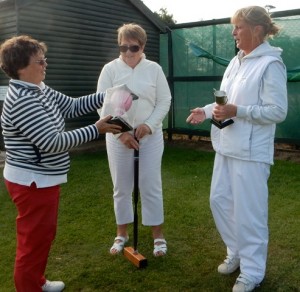