Our third level play fixture this season started well in that no wrong turns were made in finding Pages Park, Leighton Buzzard. This is a first for 2017 following errors (admittedly minor) during away trips to Watford and Letchworth. Greeted by match manager John Cundell together with the familiar faces of David Ball (2) John Thorp (2) Ross Bagni (3) and Judith Pengelley (4) our team of John Skuse(4) Judith Hand (4) Tony Frewin (4) and Karen Jones (5) got off to a bad start by losing the first 2 doubles games albeit by the close margins of 7-5 and 7-6. The sixteen singles games that followed were shared 8-8 which says much for our slightly higher handicapped team’s efforts on another splendid but hot day for croquet. Final score LEIGHTON LINSLADE 10 (106 hoops) CHELMSFORD 8 (96). Tony and John both managed to beat David and John thus doing their stroke indexes no harm at all but it should be emphasised that this was a team performance with everyone contributing to those singles wins. What a shame about the doubles! Finally tea and an assortment of tasty cakes were served after which thanks were expressed to all at Leighton Linslade for their hospitality. Finally thanks must go to Tony for driving us there and back so efficiently. JS 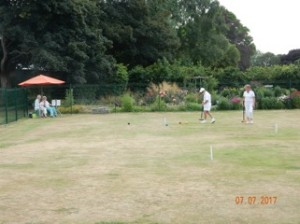 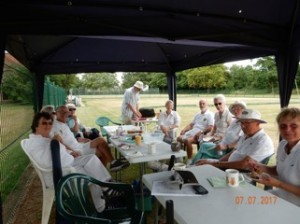