On a fine ‘normal’ summer day (blue sky, clouds, 19/20 degrees, forecast of rain later etc) the Greens arrived at Forresters Park for their Golf Handicap match against Maldon Lakeside. The lawns are not what you call pristine with plenty of bumps, warn patches, rabbit runs etc. Unfortunately not all clubs are as lucky as us so it makes us more grateful for what we have. The Green Team of Tony Frewin (3), Bob Jones (6), David Dawsey (7) and Betty Craig (12) were facing an uphill battle on alien lawns and giving away a lot of free shots to a Lakeside team of Jill Joslin (10), Peter Marvin (10), Shirley Macro (10) and Colin Beckett (12). The doubles were shared with David and Betty beating Peter and Colin 7-5 and Tony and Bob losing out on a golden hoop game to Shirley and Jill. The first set of singles produced two wins each with Tony beating Jill 7-5 and David (with the help of his opponent putting his ball through 3 times!) beating Shirley 7-2. Match score 3-3 The second round of singles didn’t go so well with Bob the only winner as he beat Jill 7-2. Lowlight of the round was David throwing away a 6-2 lead to lose to Colin!! Match score at lunch 4-6 A fine lunch of assorted sandwiches and chips was provided before we trouped out to resume the singles. The final two rounds of singles didn’t go so well with us realising the Maldon ploy of filling us up with chips had worked. Only 3 more wins were secured, Bob beating Colin 7-4, Betty beating Jill 7-3 and Tony securing victory ove Colin 7-3 having given him 9 free shots! Colin preparing to face Tony with 9 bisque. Final Match score Maldon Lakeside 11 games won (100 hoops won) Chelmsford Greens 7 (105). So with more hoops won and 4 golden hoop games lost things could have been different but all in all an enjoyable and sporting game against friendly opponents. This was followed by tea and cakes in the clubhouse before we headed home. The end is another season with our only victory, again, against the Blues so it hasn’t all been bad!!!! DD 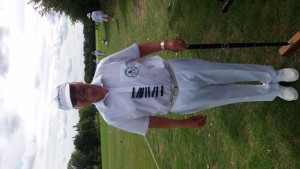